Welcome back to my journey to being 1st on Google.  This is the final update for my attempt to rank this site first on Google for my name, Alan Reeves.  If you missed any of the posts, you can find the first one here and last week’s here (126).

There are 24 sites that hit the top 5.  Some hit just once (like Triberr) with the top site showing up at 152 times (BlueCapra).  Here is a nice pie graph that shows up the relative number of occurrences for these results:

As you can see, the top 5 sites per week were, at times, diverse.  Strangely enough, Bing only had 14 (or about 58%) sites compared to Google’s 24.  Before we look at the top ranked site by week, let’s take a look at the top sites on Bing.  Since we all like charts, here is some more pie, just for you:

Looking at this graph, you can see the how each site compares to the next.  If you compare this chart to the previous one, you can see how important each site is within each search engine.  For example, Twitter was a big influence on Google but less so on Bing.  GoodReads shows up only once while LinkedIn tops the chart at 114.  Quora is big on Bing but almost nonexistent on Google.

Now that we have looked at the total results per site, let’s take a look at the top result by week.  Here is a graph of the weekly results.  The first week’s top result was at #91 and was omitted from the graph to show more detail.  You will see Google in blue and Bing in red:

In the early part of this journey, you can see a huge increase in my Google ranking the first week.  It was several weeks before I started to track Bing results as well.  As you can see, both search engine rankings were very similar; when I was up or down, I was usually up or down in both Google and Bing.  There was also quite a bit of volatility in the results that I did not expect.

In the past, I’ve tried to match up inflection points (major ups or downs) to Google updates with limited success. Mostly, I saw rankings lag 2-3 weeks after an update for these searches.

Before we get started looking at the different strategies, let’s take a look at the search itself.  In every experiment, consistency is important.  With search engines, there are a number of things that can alter search results: if you are logged in, if you are filtering the results in any way, your location, etc. 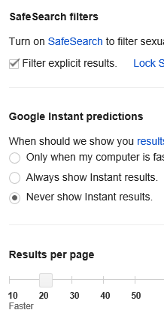 To prevent many of those issues, the searches were performed on a completely separate computer.  By doing that, there was no possible way to alter the results from the search history, logging in or not, or browser settings.  Early into the searches, I realized that was not a long-term setup so I began to perform the searches using Internet Explorer on my laptop (Chrome is my browser of choice).  Setting the IE to delete the history and cookies after each exit resulted in the same results that were coming up on the separate computer.  This is not a major deal but unless the search parameters were consistent, the results can’t be trusted long term.

The search settings on Google were set to filter explicit results, show 10 results (raised to 20 late in the journey), and not show instant results.  Surprisingly, filtering explicit results did not change things much but choosing not to display the instant results, at times, changed the first page results quite a bit.  Again, not a major deal either way but we are looking for consistency.

After the search setting were set, the search was performed.  The top 5 results for each week were recorded.  All other results in the first 100 were counted for a total number of sites that week.

And that was it.  Nothing complicated.  Just 126 weeks of tracking, writing, and striving.

When you are trying to rank for any keyword, it’s important to know your competition.  Before starting this journey, I had no idea how many guys out there were named Alan Reeves.  So, here is a quick list of some of the ones I found:

This guy was most often in the top of Google results.  He has a Wikipedia page and more than a few pictures out on the web.  His popularity is what you would expect from an athlete playing at that level.

This British born composer/producer/performer has many song credits to his name from back in the late 70’s and all throughout the 1990’s.  He has won a number of awards throughout the years.  In the search results, he showed up the most associated with the song “The Chase” that he composed and performed on the Kill Bill, Vol 2 soundtrack.

This Alan Reeves at one time had his own site, Facebook profile (high ranking), Google+ profile, Squidoo lens, and more. One of my favorite instances of this guy was his Squidoo lens; the first line states “I’m Alan Reeves, and you’re not.”  After reading that line, I just had to comment stating that, while it is a great opening line, I would have to disagree… 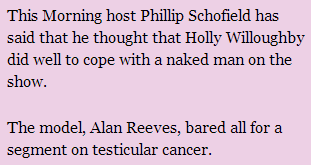 If a picture is worth a thousand words, this guy must have novels written about his.  He is an actor and bears a good resemblance to Matt LeBlanc (Joey from Friends).  When doing image searches, especially in Bing, this guy is everywhere.  You’d expect that from an actor/model, of course.

One search result was an article about this Alan Reeves showing up on This Morning, a British daytime television show.  As you can see from this clipping, this guy is willing to do whatever it takes to get the point across.  This article is from way back in September 2009.  Glad to know someone with my same name is willing to do what it takes to raise awareness for important issues…

Located in my home state, Alabama, this Alan Reeves works for, at the time of this writing (according to LinkedIn), the Birmingham Business Alliance.  He is a graduate of Harvard University where he also played football.

This Alan Reeves is a Real Estate agent in Vancouver, WA.

This guy get’s the award for a great business name.  MouseCalls is a company that handles all of your IT needs and is located in Tennessee.

This list could go on forever but the above results are the most common for text results.  For the image results, the actor, British football player, and musician showed up most often with my pictures scattered around.

As with anyone, there are people out in the world that share your name who may have had a run-in with the police.  The result is quite a few mugshots.  Thankfully, these images are usually closer to the 100’s than the top.

Some of the strategies that were used included commenting on posts, creating social media profiles, and publishing content.  When commenting on posts, I tried to link to relevant posts of my own.  That way, there were more links to the deeper pages of the site that usually aren’t visited or linked to much.

Apart from Facebook, Twitter, and some of the more common social media sites, there are hundreds more.  The tool I used to social media sites to sign up for is KnowEm.com.  There, you can search for your desired username to see if it is available.  It’s also a great place to track which accounts you have created by claiming the different sites and profiles.

Most of the site profiles were setup with basic information that included links to various other sites including Google+, BlueCapra, Book Worm Laser & Design, About.Me, and more.  I experimented a little with linking different sites under different profiles but mostly, once created, they were left alone.

One way Google determines the ranking of your site is how many links you have pointing to it.  There are Follow links and NoFollow links but as a whole, the more real, non-spammy links you have to your site, the better off you are.  Looking at the incoming links in Google Webmaster tools (specifically for this site), we can see that Pinterest, StumbleUpon, and a few various blog comments resulted in a large number of links.  The more authoritative the linking site (such as schools, government, or popular sites), the higher Google ranks your site.

When trying to rank higher for your name, this presents a bit of a problem since few if any sites write posts about names but rather, specific people.  It should be much easier to find articles about a particular niche rather than articles featuring people with the same name you have.

Summary – The search for Alan Reeves

This has been a long journey, going from #91 on 1-25-12 to #1 on 6-22-14, about 2.5 years.  There are many lessons you can learn from a project like this but mostly, for me, it was perseverance.  Everyone wants to quit when it appears that no progress is being made.  You have to decide to push through the doubt and stick with it.  There is no shame in quitting but there must be things in life where you feel failure is not an option.  It is in those projects where you really find out what you are made of.

With all search results, rankings come and go.  If I would have had a more common name, it could have been more difficult.  For those people that have more unique names (like Justin Lukasavige of CoachRadio.tv), it would be quite easy since, from what I recall, he said there is only one Justin Lukasavige that he has ever heard about.

From my research, there were no sites talking about ranking for your name besides online reputation management.  Sure, everyone wants to get rid of the embarrassing pictures, posts, etc but no one that I could find was trying to specifically rank for their name.  Most #1 rankings came as a byproduct of publishing content and most people focused on keywords, not names.

Looking back on the past 2.5 years, my first thought is about how long it took.  I fully expected to be finished in 12 weeks or so, hitting #1 like a rocket.  Apparently, it was not meant to be.  If it were easy, everyone would be doing it and all things worthwhile in life take work to achieve.  Mostly, I’m happy that this journey is over.  Now, to find the next journey….

Find what you are looking for